Logging into Second Life last night, I found myself presented with a new updated terms of service. The choice was pretty simple, sign if you want to continue logging on the Grid. Many of us just automatically sign without a thought. Myself, I read it, noticed a few things, and expected to hear about more before long. 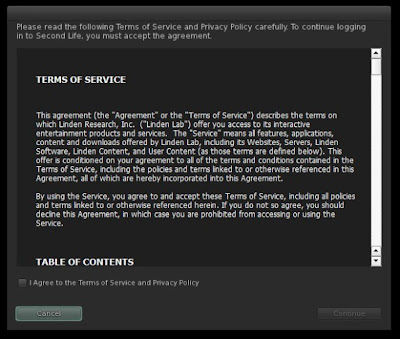 So what was the result of this new TOS? In a couple groups, worried residents expressed their concern, as well as some IMs aimed at me. A few people asked me if Linden Lab would be doing away with Adult content. While it is true some people are jumpy every time there's a change, the recent blunder with third-party Linden exchangers has rightfully shaken the already shaky confidence residents have with the Lab.

There are two lengthy forum threads discussing the TOS, in the official Linden Forums, and Second Life Universe. Among the changes noted was the line "You are not our employee." Was this to limit the Lab's liability of the behavior of it's employees when on SL off the clock, putting in writing that they owed content creators and others who benefited Second Life nothing, or a possible defense against people who were tricked by residents pretending to be Lindens?

The general idea, at least among those not confused as hey, is that the changes were a "cover your butt" move to protect the Lab from additional possible legal complaints. One commented, "LL has a really good TOS in the sense that they have it in mostly proper order along with a lot of legalese that scares most people. There is always that one who isn't scared with money to either burn or feels strongly enough about something that will push it to the envelope (right or wrong) through the courts. But at the same time, loopholes galore all through out it because they just can't CYA everything."

There were no shortage of comments, including a proposed TOS by the former Pathfinder Linden. 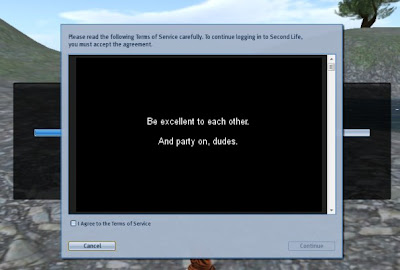 If only if it were that simple.