In Janurary, Linden Lab bought "Blocksworld," a game described as a mix of lego and Minecraft" designed for use on the iPad. At the time, it was one of a number of acquisitions by Linden Lab that appeared to some to be shots in the dark. Recently however, Blocksworld has been doing quite well. 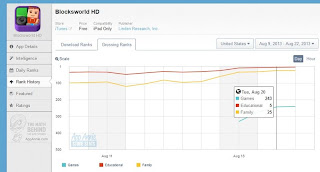 According to New World Notes,  Rod Humble announced that Blocksworld had rose to become the third most popular of Apple's iPad application, "Woot, number 3 in the appstore for Blocksworld HD!" In the words of Hamlet Au, "For the first time in its 10 year+ history, Second Life is not Linden Lab's sole hit product." The game was being downloaded at a rate greater than "Candy Crush," which was making "an estimated $880,000 a day. If Blocksworld made just a fourth of that … it would be making more money than Second Life."

Among the responses Hamlet got was, "And how does this help the SL community exactly?" Hamlet reminded that Second Life's source of revenue, land tiers, has been in decline, and before there had been the danger of eventually "Second Life at ultimate risk of going up on the auction block in a fire sale - and who knows what would happen to it then." That it now had another source of revenue, perhaps it would be inclined to take chances in finally lowering it's land tiers. Hamlet was also confident that many of Blocksworld's fanbase would eventually be inclined to try Second Life, suggesting that Linden Lab revive Teen Second Life for young Blocksworld users.

It's good news for Linden Lab that it's revenue problems are starting to ease. Whether that means the fortunes will soon spread to Second Life, time will tell.