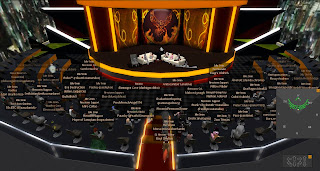 On Saturday August 10 at Noon SL time, Jessica Lyon and others of Team Firestorm held a public meeting concerning developments with their viewer. Staff included, the meeting was attended by close to 80 residents. Jessica talked about the CHat User Interface or CHUI, and that putting it into the Firestorm Viewer was taking some work, "Linden Lab put a lot of stuff in" with code that conflicts some with Firestorm's own programing. Fixing it was proving to be something of a "nightmare" with "broken" codes.

Of Linden Lab's Project Sunshine, Jessica thought it was going smoother than she believed it would. She had earlier predicted that it would take three rollouts before the first part of it could get going, and the Lab had gotten it right on the first try. She told the audience Project Sunshine and it's server-side baking currently covered about 20% of the Grid.

Jessica and others in the staff, such as Tonya Souther, talked about other issues, such as the "chiclets," or mini pictures on the Linden and Firestorm viewers, Jessica commenting, "We've been trying to kill chiclets for ages." Whirly Fizzle stated in chat, "we have chiclets as optional for the next release." Of the next Firestorm update, Jessica promised it would be a major one.

For those who were more than a little critical of Team Firestorm's work, and it's discontinuing work on the old Phoenix Viewer, Jessica reminded that they were a group of volunteers working for free, and telling them what to do was a bit like "herding cats." This got some chuckles as Jessica'a avatar is a neck catgirl with ears and a tail, and teammate Tonya Souther a furry tigergirl. There were also reminders about filing JIRAs, "seriously, file a JIRA issue and explain as concisely as you can what the problem is and what you want to see changed and if we need more clarification, you'll be asked."

Someone also brought up the old Emerald Viewer, and there was a short explanation to newcomers that Jessica and others on Team Firestorm were once part of the team behind that old popular 3rd party viewer before some "drama" with Linden Lab, and they left to form Team Phoenix.

The Firestorm Viewer is the most popular among supported third party viewers. Except possibly for the old Phoenix Viewer which it developed but no longer supports, no other Second Life viewer is as popular.

The Phoenix blog is on http://www.firestormviewer.org/. Tonya Souther, who leads the Mac development team, has her own blog at: http://secondden.blogspot.com/.