"Jamm For Genes" Raises Over Half a Million Lindens 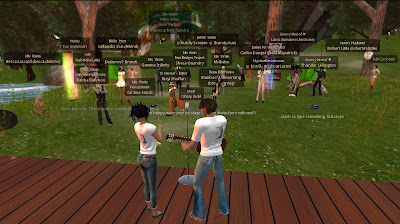 Late Sunday evening at the Vahalla sim, the "Jamm for Genes" reached it's goal. Just after 11PM as musician OhMy Kidd was playing on stage along with Sariane Sands, the total amount raised for the charity for the Children's Medical Research Institute passed the half million Linden mark. The moment was marked with much cheers and applause.

There was also a bit of joking. "I'm sooo tired," Cellandra Zon of The Pocket commented, "and I didn't stay up as much as Bundy did." Bundy Xue of B&Bs just laughed, "Cell, it makes it worth it to go without sleep." The two girls huged one another, Bundy commenting, "Oh emm gee, I am not tired now, I am wide awake." 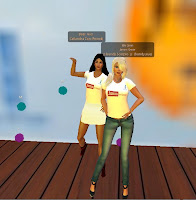 As the last hour of the fundraiser that had gone on since Friday went on, people were saying goodnight and congratulating one another, "It's been an awesome weekend." "Congratulations to everyone involved." Checking the next day, the total raised was over 530,000 Lindens.

"Thank you for your gene-erous contribution."