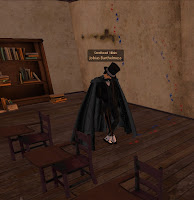 The Steelhead Community recently held an election for mayor. The two challengers against the incumbent TotalLunar Eclipse were Willow Leafstorm and Jobias Barthelmess. Lunar has been a popular mayor and Willow the owner of a well-attended dance club. So Jobias as a self - described "villain" was not expected to do well on election day. To the surprise of practically everyone, Jobias won. Soon after, Second Life Newser met up with the man in the black hat. Jobias told of he had a few plans in store for Steelhead, plans that include cutting down the forest, strip-mining the land, sending the kids to work in the mines, and making the non-humans wear collars.

Read more in People.
Posted by Bixyl Shuftan at 1:00 PM