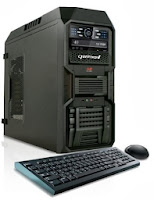 It was shortly before yours truly began going on Second Life on a regular basis in which he got the computer that would be used to write his stories as a reporter for JamesT Juno's SLN, and then the first few years as editor of Second Life Newser. But eventually, one needs to update their equipment, either through the old wearing out or breaking down, or there's something new that is worth the money spent. And after more than six years, it was time to get a new machine.

Read more in Extra.
Posted by Bixyl Shuftan at 3:00 PM