During this Veterans Day weekend, there was a special exhibit set up in the Southfield sim: the Veterans Tribute memorial wall. 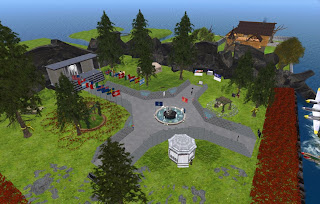 On Veterans Day, I gave the place a visit. The landmark I was given took me to a small replica of the Lincoln Memorial, and I was facing the memorial wall in front of me.  The total amount of ground made up a quarter sim. It was made up of a fountain with four sections of wall to the northwest, northeast, southeast, and southwest. Each of the sections was made up of bricks, each with the name of a veteran given by a resident. The bricks have the soldier's name, plus rank and branch of service plus either a date or what conflict the soldier took part in. There were a couple bricks for veterans of the Revolutionary War and Civil War, though most were for World War Two and more recent conflicts such as Vietnam, Afghanistan, and Iraq. One brick was for the late Second Life resident Lothi Aeon, whom in real life was Army Specialist Jacob D. Borton. 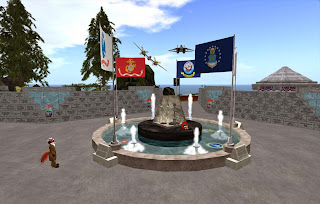 Most of the names are American, but the wall is open to all and some were in honor of veterans from other nations. The flags of a number of democracies fly over the memorial. Around the wall are a number of smaller memorials such as one for Canadian servicemen whom did not survive their time in Afghanistan. Over the central fountain itself flew flags of the US Army, Navy, Marines, and Air Force, with a flame burning in the center, with a statue of a rifle stuck into an unoccupied pair of boots with a helmet on top, a symbol of a soldier fallen in battle, with the following chiseled in stone behind it:

There are also a few combat vehicles set up, plus a few aircraft in the air. Trees and rock separated the exhibition from the rest of the sim. Bordering the sim edge was a strip of poppies. 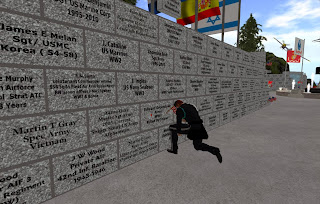 While there, one of the Tribute staff was there, Wildroses Pevensey. She greeted visitors, whom included a number who were veterans in real life. She told me that the exhibit had been up for three days, and was due to be taken down the next day. In previous years, the Veterans Tribute was part of larger events, and part of a sim-wide display that was up for a week, "We've had to scale back."

The following day, the memorial was gone, in storage until Veterans Day next year.