It isn't often Second Life is mentioned in larger media these days, and often it's for the negative, such as last month when a couple in Tulsa Oklahoma was arrested for neglecting their daughter's well being, and their time on the virtual world was blamed in the press as being a factor. It's tenth anniversary did not go entirely unnoticed, however. In late September, "The Verge," a technology news website, wrote about the place in an article titled, "Second Life's Strange Second Life." 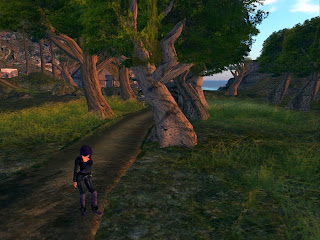 Written by Chris Stokel-Walker, the article isn't always flattering, starting off by describing Second Life as "the faithful replication of our modern world, where whoring, drinking and fighting were acceptable." And at one point one of the people interviewed claims "at one point" Linden Lab admitted "six of every ten women" avatars were actually males in real life. But The Lab never made such a comment, and it is not true. Hamlet Au, who also wrote about the article, also called the claim baseless and responded the Lab instead stated its most active users are women in real life.

More accurately, the article contrasts the ability to be and live like a fantasy/sci-fi character to "huge areas ... that look just like suburbia" in which people faithfully replicate real life existances the best they can, "an entire world of opportunities out there and (some) people chose to be couch potatoes."

Chris interviewed several people, including former Lindens, one who commented about the Lab, "after five years of working quite closely with them, I still don't feel I really know what the culture is. ... They simply never seem to understand their own product." The article ends on a fairly optimistic tone, suggesting Second Life will still be around in some form ten years from now.

More than two hundred readers commented on the article. There was some general bad-mouthing about Second Life, such as calling it for "losers," as well as comments were about the "jiggly" layout of some of the pictures on some computers. But there were also balanced comments and some of praise for the virtual world such as a well written one by Jo Yardley.

Once you realize the potential of SL and all the options, other ‘games’ suddenly seem less exciting. ... yes, SL has a steep learning curve and it takes a while for people to figure it out, to understand the possibilities and how it all works. ... But once people realize the secret of SL, they usually get excited. The secret being that you can build and do anything and if you can’t find something you like, you can build it yourself. We all have a passion we are excited about, something we love, something we enjoy sharing with others. SL allows you to do that in a way nothing else can.

To see the article in it's entirety, (Click Here).