Last week, some statistics about the Inworldz grid were released. Jim Tarber posted graphs in the InWorldz forum showing the growth of the virtual world. They show a slightly different rate of growth than what was suggested earlier as a result of Linden Lab's Terms of Service fallout, though still impressive. 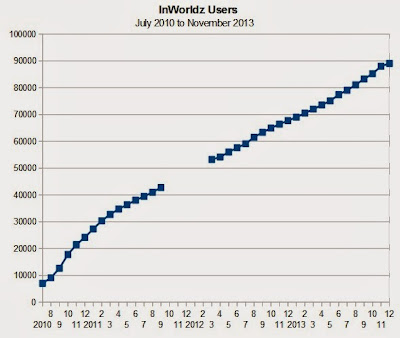 Over time, the number of users in Jim's statistics show steady growth from July 2010 in which the Grid's total number of users was less than ten thousand to today with the total just shy of 90,000 and expected to reach 100,000 "before Easter 2014." There has been no great jump in registered users in the past couple months, though. 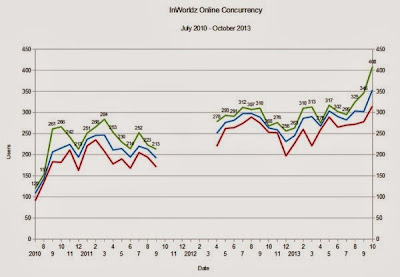 Where there *has* been a big jump recently is InWorldz's user concurrency. Numbers have overall made a slow climb in the past few years. But over the past few months, the number of residents in the Grid at any one time has gone from less than 300 to over 400. A rise of more than a third.

What this suggests is that while there are some people visiting InWorldz for the first time, since the ToS mess began, more people whom had already been to this Grid are returning. 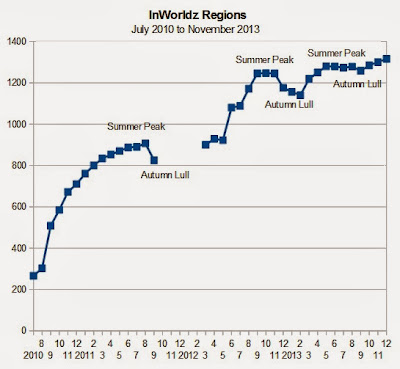 It's also notable that in the past, land sales have gone through "summer peaks" where they rise, and "autumn lulls" in which they drop. This time the "lull" barely registered in the statistics, and sales climbed again, "that could be a sign of a large rise in the new year."

While InWorldz numbers remain small compared to Second Life, these statistics suggest it's been gowning while the larger Grid was just treading water. And after the ToS mess began, it's been much more active with more virtual land being bought than before.

*Addition* This month, Hypergrid Business listed InWorldz as having an active user population of over 8200.