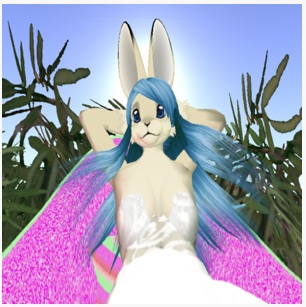 One of the Sunweaver group is becoming a little less active on the Internet. Perri Prinz announced on her Symphonic RP Livejournal blog that she will no longer be writing additional entries, "The Bunny Has Left the Building."

After 13 years of keeping this blog I have finally decided to close it. And, in doing so, withdraw everything I've attempted to contribute to the general common sense of the Internet. The main reason for this is that I've grown too ill to write articles and essays anymore. I can still work on stories to a certain extent, but I do that in another blog.

Perri Prinz has been around in Second Life for several years. As part of the Sunweaver community, she has been known for many things. She has been working on her ongoing "Spectral Shadows" serial for decades, posted online in spectralshadows.livejournal.com/, which she calls her "sci-fi fantasy soap opera." But inworld, she was best known for her DJing, notably with her collection of classic rock music. She along with her partner Recoyote Mindes set up the "Perri's Xanadu" classic Rock club, which has been in around since 2010, in operation several times for periods of months. But in recent times, the pressures of her real life problems have been causing her to slow down.

Perri wrote her Symphonic RP blog to write about whatever was on her mind, from discussing what was and what wasn't a certain genre of rock music to the anthropomorphic fiction genre, "I think Furry Fandom gets itself now. They don't need me to explain what it's a fandom for, because there are a lot of new people getting it right these days." One of her last writings was about the passing of the late David Bowe, commenting in a sense he wasn't dead, but would live on as part of his music and how his times would be remembered. But now these and other articles for years are gone, Perri closed access to all but her goodbye, not sure how relavent the thoughts of someone who grew up in the 70s are to today, "I feel the landscape of the Internet has changed, making my older articles unnecessary." Going back, there were articles in 2007 related to Spectral Shadows, with nine years in between missing.

"Tired bunny is tired, more than a little dizzy, and about to pass out. Here's hoping that better days are coming for y'all as the bunny fades away, returning to the dreams from whence she came." She then ended her entry with a youtube of the song "Fade Away" by The Mummers.

The day is done,
the blinds are drawn,
the sound of afternoon is gone.

The corner store has locked it's door,
and everyone has left for home.

When their sleepy little heads,
settle snug inside their beds,
you and I will stay and watch the sun
fade away.

The balladeer, the buccaneer,
the liar, the man who would be king,

The cavalier, the profiteer,
the one who knows only suffering.

As their cannons gather rust,
all their castles turn to dust,
you and I will stay and see them all
fade away.

Hopefully this is not the end for Perri, but a hiatus that will end when her real-life situation improves.