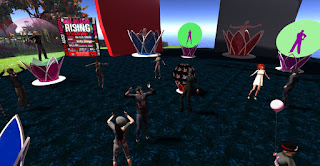 One Billion Rising certainly was a spectacular event as usual from opening to close. The dj stage was filled for most of the time with numerous DJs donating their time to perform. Some merchants had donated gifts that were available at the stage too. The stage was crowded all day. There were dance performances that included various dancers at both 10am and 10pm. The Shining Starlettes were on stage at 12pm The 2LEI put on quite a party between 12 and 3pm with Tansee putting on her marvelous particle show at their installation site.  If you have never seen her watch for a show somewhere sometime. 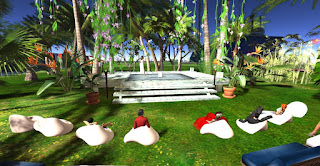 At the same time there was a presentation by quite a number of poets presenting in Poets Against Violence. This included a special performance of the play ‘The Lost Pleiads’ by Bhelanna Blaze. It was a busy day on the four sims. People spent time on the walkways visiting the various installations as well as attending activities. I took a picture of most of the installations and have some of them for you. The sims will be there on Monday but the take down day is Tuesday. I am glad to be a part of this event every year and look forward to the next one. Thanks to all of the committees who worked so hard to make it a day to remember.
Gemma Cleanslate
Posted by Bixyl Shuftan at 6:02 AM