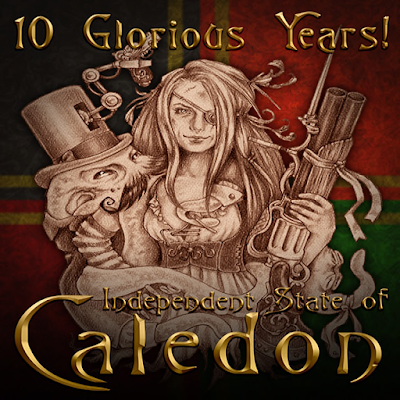 The Independent State of Caledon will be celebrating its 10th anniversary this coming Friday the 26th with dances and events. Caledon is a thriving Victorian/Steampunk-themed community, started in 2006 by Desmond Shang. It has grown steadily since then to a present 33 sims and 2057 citizens of all races. Even though the land is steampunk we are far from a demanding dress code and guest are totally welcome.

Following the dance and sharing it's own anniversary with Caledon will be the Caledon Catgirl Brigade 7th Birthday Ball & Caledon Anniversary Wrap-Up Party starting at 9:30pm SLT till midnight. They stated "The night promises to be a blast (literally as we'll blow the place apart with fireworks and other bewm for the finale of the evening!)"
Place: Caledon Pensans (125/142/186)