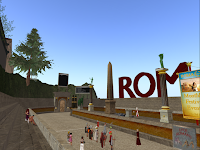 On the weekend of February 21 and 22, the Roma historical roleplay community held their Lupercalia festival. For those who don't know, it was a Roman predecessor to Valentines Day, though very different from it's modern replacement. The festival included a number of events from horse racing to dances. But it began with a recreation of the ancient Roman ritual for the holiday. Deaflegacy was there, and wrote about it.

Read Deaflegacy's article in Events.
Posted by Bixyl Shuftan at 6:04 AM