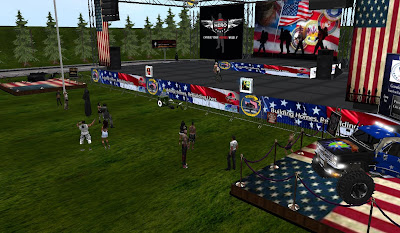 There were a few events that took place this weekend in Second Life. The final Relay for Life spinoff event before the main season, "Paint Second Life Purple," started, with the RFL "Home and Garden Expo" still going on.. The steampunk-themed community of Caledon celebrated its tenth anniversary. Two fundraiser events for the "Homes For Our Troops" veterans charity took place, the monthly one at Veterans Isle organized by Frets Nirvana, and an ongoing one at Grand Manor with music eventx most days (pictured above) that lasts until tonight.

More details about some of these events later.
Posted by Bixyl Shuftan at 6:00 AM