Parades and Party in New Toulouse on Saturday, Parade Today 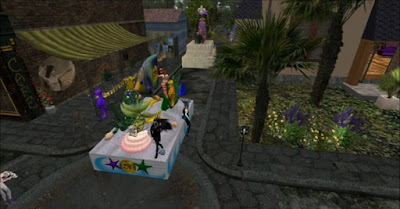 On Saturday, the New Toulhouse sim, the location of a 1920's New Orleans roleplay community, held their "Samedi Gras" Parade at Noon on Saturday February 6. Following it was a party at the town square. Pazzo Pestana sent a video to the newser of various floats, and partiers, going down the streets, while others watched and/or danced from the streets. The event has been taking place every year in the sim for a few years. 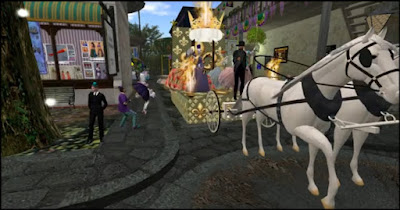 In a proclamation, listed in the New Toulouse blog, Maggie Hawksby the "Queen of the Carnival" proclaimed, "…that the Joyous Music of Carnival shall fill the Streets of our Beloved New Toulouse, Multiplying all Merriment;…that Colorful Costumes, Elaborate Masks, and Outrageous Adornments of all kinds be the order of the day;…that Dancing in the Streets, on Sidewalks, Balconies, yea, even upon the Rooftops, shall be greatly Encouraged;…that Fair Weather and Blue Skies shall prevail, that the Multitudes might gather and celebrate without hindrance;…that the Royal Constabulary of New Toulouse shall marshal the Grand Celebration with their Customary Skill and an appropriate Degree of Forbearance toward the Inevitable Hijinks and Tomfoolery;…that the Keepers of Bars, Inns, Taverns, Grocers, Cigar Emporiums, Stables, Chinese Laundries, Bakeries, Seafood Merchants, Barber Shops, Bookshops, Print Shops, Gambling Halls, Dance Halls, Hospitals, Brothels, and Eating and Drinking Establishments in Her beloved City shall throw open their Doors to receive all Carnival Celebrants, of whatsoever degree or kind with our customary Good Fellowship, Warmth, and true Southern hospitality." 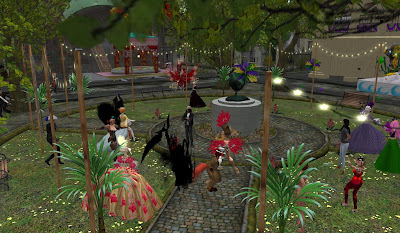 Following the parade was a party, which the Newser was able to drop in on. Again, there was a variety of outfits there from regular street clothes to fancy Carnival-style outfits to 18th century wear, and one woman was wearing nothing at all.

Henri Godenot, the mayor of the town, stated this wouldn't be the last event for Mardi Gras. Today would be the "Blessing of the Waters at 5:50PM" SL time at the New Toulouse Bayou  at (78/56/21), followed by another parade.

More pictures can be seen from the community blog, and it's Flickr page.