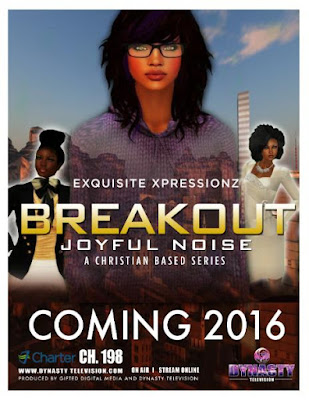 A machinima filmed in Second Life, described as having a Christian theme, is appearing on Internet TV tonight.

A series filmed using Second Life is set to air its first of three 30-minute pilot episodes this coming Monday, February 1, 2016 at 6pm Pacific. Breakout “Joyful Noise” is the first in the series that focuses on a young woman named Joy Jamison who works in a high-end boutique but struggles with her faith and self-image.

Those in the Midwest who are interested in watching may check their listings for Charter Cable channel 198. Everyone can view the broadcast on Dynasty Television via stream.

There was also a trailer available

*Addition* The first episode can be viewed on Youtube (Click Here).
Posted by Bixyl Shuftan at 6:02 PM