Meanwhile, Back in Rust 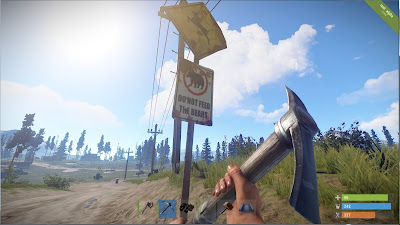 It's been almost a year since I last wrote anything about the survival MMO game Rust. There's been a few changes in the game since then. There are new locations like abandoned supermarkets and gas stations. Characters have hair now. Blueprints are back, and they're needed in order to be able to build certain items. There's a new weapon: the railgun. Binoculars have been introduced. How resources are gathered has changed a little, starting off small for the first few wacks, and getting plenty at the end.

And going about, I happened to notice this sign which I hadn't seen before, referencing a familiar enemy to anyone who's played the game. Guess one can't say the developers have no sense of humor.