On Tuesday November 14, Linden Lab announced on the official Second Life blog that they were asking merchants to take part in a Christmas-themed shopping event next month. The dates given for the event were from December 15 to January 1st. Monday November 27 will be the last day to register. 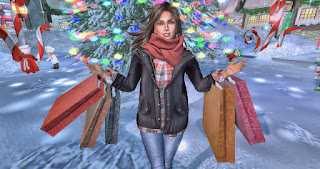 We’re winding up for a winter inworld shopping event - and we’re now looking for Merchants who would like to participate! For SL14B we held a similar shopping event that was a great success for both customer and Merchants alike - and we are hoping to do the same this winter. This event, which runs from December 15th, 2017 through January 1st, 2018, is an opportunity to introduce new customers to  your brand. We are looking for merchants willing to offer a discount on some of their items (think Black Friday and Cyber Monday deals!) and possibly provide a little non-exclusive gift to holiday shoppers.

Last year, Linden Lab had a "Twelve Days of Marketplace" event. But they're comparing the shopping event to the Anniversary Shopping Event they organized to take place alongside the SL14B.

Image from Kathy Nikolaids
Posted by Bixyl Shuftan at 6:02 AM