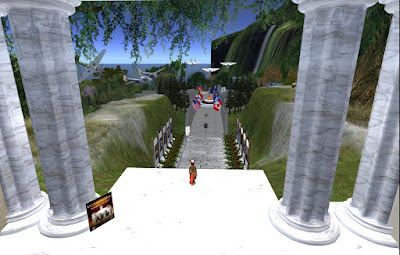 Veterans Day, or Remembrance Day as it's known in some countries, is in a couple days on Saturday November 11. And as it has every year for the past 11 years, the Veterans Tribute has appeared in Second Life. The place is mainly a memorial wall in which each of the stones have a name or names of many veterans, American, Canadian, and others, of wars current and in the past. While a few of the names are among the living, most on the wall either died in action or passed away in peacetime. The center of the tribute is a memorial flame surrounded by a ring of flowers, a ring of water, and the five flags of the five branches of the US military. 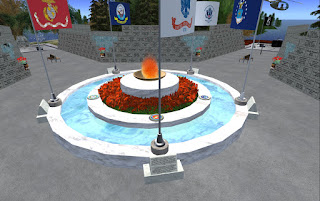 The Second Life Veterans Tribute Group is a non-profit organization made up of volunteers (both civilians and ex-military) who have come together to build a Veteran’s Tribute in Second Life. The goal of the Tribute is to provide a non-political, content filled, educational, interactive SIM inside Second Life where men and women of all walks of life can visit and provide remembrance and honor to those who have served in the Armed Services.

Visitors can request a new stone be carved in honor of someone by putting the name and some information on a notecard, and putting it in one of the mailboxes  There are also roses and flags near the start that people can get and place inside the memorial. There are also planes up for display, and a small POW memorial. 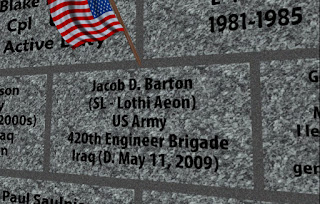 The Newser has reported on the Tribute for the past several years, including that of onetime Second Life resident Lothi Aeon/Jacob D. Borton, and when one Marine told the story of his fallen comrades.

The Tribute will be up until November 13th.