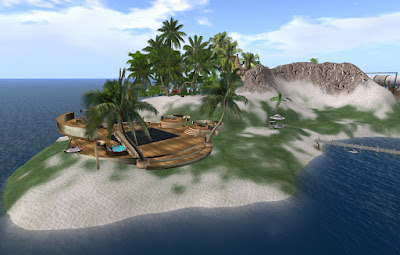 It's been a little over a month since Sunwater Three joined the Sunweaver lands. The island soon had some builds placed on it, though the west end remained bare. That changed on Wednesday November 1 with the announcement that a "club" had been set up there by Rita Mariner. Or rather, it's a hangout for folks as there are several venues in the Sunweaver Estates offering events, and so none are planned here.

Just a Hangout for the Sunnys and Angels, come discover the Hangout provided by our Bunny Cheiftess, we're here right now just to test it out, you are all welcome to come and check out the club and sim.

The announcement was followed by a few people, including myself dropping by to check it out, with DJ Ifrit dropping by for a short time to play a little music.

The Sunweaver Oasis Beach Hangout is located at SunWaterThree (54, 37, 27).