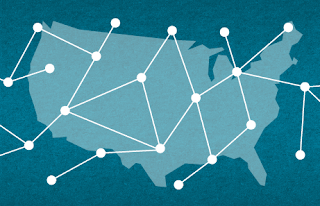 Earlier, the Newser wrote about the plans of the FCC Chairman Ajit Pai to dismantle regulations protecting Net Neutrality. To the ordinary Internet user, it may seem like a David and Goliath style struggle of thousands of little guys like him versus huge corporations. As it turns out, the little guys have some big guys on their side. On November 27, also known as "Cyber Monday," one of the biggest days of shopping online in the year, over 200 online businesses and trade groups signed their names to a letter to the FCC asking them to scrap Pai's call to end Net Neutrality protections. Among those on the list were Pinterest, Reddit, Tumbir, Twitter, and Vimeo.

Because of the open internet, a web developer can launch a business out of their own apartment, an aspiring fashion designer in Wyoming can sell clothes in Los Angeles, or a caterer can find new customers in their town. Because of net neutrality, consumers and businesses have unfettered access to one another, increasing competition and consumer choice.

Without these rules, internet service providers will be able to favor certain websites and e-businesses, or the platforms they use to garner new customers, over others by putting the ones that can pay in fast lanes and slowing down or even blocking others. Businesses may have to pay a toll just to reach customers. This would put small and medium-sized businesses at a disadvantage and prevent innovative new ones from even getting off the ground. An internet without net neutrality protections would be the opposite of the open market, with a few powerful cable and phone companies picking winners and losers instead of consumers.

And what would the repeal of Net Neutrality mean for Second Life? According to Philip Rosedale, the founder of Linden Lab, it would be very bad. In a post on Twitter, Rosedale reminded everyone that for many users of the Internet, where they live there's only one Internet provider, especially for high-speed Internet.

Many Americans have only one internet provider. Removing the requirement for net neutrality would allow their opinions to be biased by the provider. Unbiased information will become a privilege of the rich. This is against everything we stand for as a country.

Talking to Hamlet Au of New World Notes, Rosedale explained more, "The end of net neutrality would be especially negative for high bandwidth services like SL and High Fidelity that are delivered by less powerful companies. I would not be surprised to see providers with no competition simply re-introduce by-the-megabyte billing for 'non-premium' services, taking us all the way back to the stone age of AOL and other early online services."

Second Life can be quite a "bandwith hog," to quote the starter of a 2007 thread from the SL Universe forums in which one person stated his Internet plan's bandwidth allowance for a month only covered slightly more than three days of use. With this in mind, it's fair to say the end of Net Neutrality would strongly affect a number of core residents. For users who spend a lot of time here whose Internet provider ends up putting a strict bandwidth limit with high charges for going over,  this would mean paying more, perhaps significantly more, for a higher level of use, or severely cutting their time here.

On another note, an article by the Washington Post reported that "hundreds of thousands" of emails to the FCC about Net Neutrality were likely fake. An article in Hackernoon stated that there were more than a million fake messages to them calling for the repeal of Net Neutrality, concluding that only three to four percent of the total of comments they had received were probably real.