"The Atlantic" Writes About Second Life 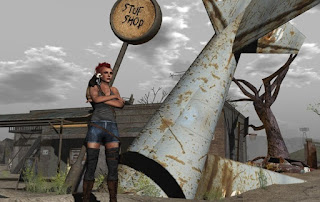 Earlier it was revealed that "The Atlantic," a publication with both paper and online versions, would soon have an article about Second Life. A few days ago, it was revealed as part of the magazine's December 2017 edition. Written by Leslie Jamison, the title is less than flattering, "The Digital Ruins of a Forgotten Future." And at one point early on, the writer "found myself wanting to write 'Second Life makes me want to take a shower.'"

But on the whole, it was a thoughtfully written article. She writes about some people with disabilities who are able to go about Second Life the way they can't or no longer can in real life, "When I rode horses through the virtual Yosemite, I thought of how the woman leading me through the pines had spent years on disability, isolated from the world, before she found a place where she no longer felt sidelined." She also went some into the money people put into here, and talked with Philip Rosedale about Second Life's first days. At one point, she suggests the ridicule some have for the virtual world is "because it takes a recognizable impulse and carries it past the bounds of comfort ...  It crystallizes the simultaneous siren call and shame of wanting an alternate life."

There were some comments about the article on a thread on the SL Universe forums. Although there were a few snarky comments, others also thought the article was well written, "That is the best SL article I have ever read." Others had a more mixed opinion, "Although she faithfully repeated what people told her about the appeal of SL, it's too bad that she didn't experience its appeal herself." There were also a few comments under the article New World Notes wrote about The Atlantic's article, one saying the reason Second Life didn't do better was that Linden Lab didn't make accessibility a high priority, "Now Linden Lab is doing the same mistake again, with Sansar."

One can read the full article (here).