Announcement: This Saturday at The Science Circle - "Methamphetamine" 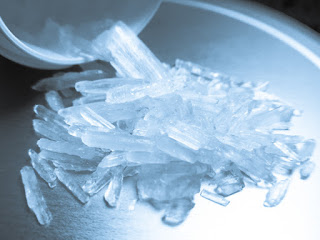 Methamphetamine was first derived from another stimulant in 1893. Initially unrestricted, it seduced populations of many countries by its stimulant effects and addictive nature.

Aside from a few accepted medical uses as a controlled substance, it has played

– an economic role as a profitable drug,

– a geopolitical role as an agent of enhancement for military personnel and political leaders,

– and with underground manufacture and distribution, in the illegal drug trade in the United States and elsewhere.

This presentation will discuss the pharmacology of N-methamphetamine and its use in medical treatment as well as drug abuse, with emphasis on the mechanisms of action and pathophysiology that arises from addiction and long term use. We will also examine the medical costs and criminal impact on society arising from the existence of this drug.