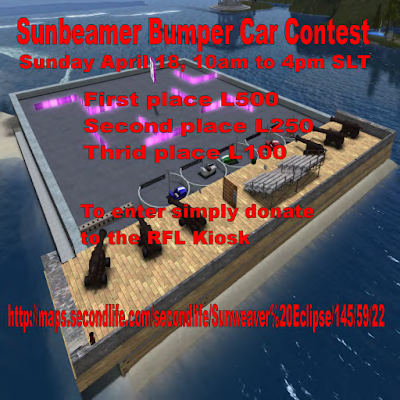 The bumper cars that were part of last year's Sunbeamer Carnival are back.  This time as part of the Team-munity Challenge. There's no carnival this time. But it's still the same chaotic fun of running around and hitting the other bumper cars. When a car is hit a few times, it will start to smoke. The more often it's hit, the heavier it smokes until it catches fire and blows up (the driver is safely ejected). Sound simple? Not quite. The obstacle walls inside the course change randomly every so often. So one second you may have nothing ahead of you, and then the next finding a wall in front. And to make things more interesting, there are six cannons that onlookers can fire into the course which if they hit a car will damage it like being hit by another car.

The event take place in Sunweaver Eclipse (145/59/22). From 3-5 PM, there will be a special Relay party at the BBBC, where instead of tips people are asked to donate their money to kiosks, notably those for Snow's "Bid Me" event. The second event is at SunWaterThree (75/56/25).

Posted by Bixyl Shuftan at 6:01 PM