Lately the map function of Second Life has been glitched, a fact that somewhat complicated our reporting of the new sims in Bellisseria last week. For a number of residents, these glitches can mean getting around is more complicated and takes longer. And as of now, Linden Lab has no idea when these issues will be fixed. But two people took matters in their own hands with resident-made maps, which can be accessed on a web browser.

One is the Eddy O'Farrel map, found on http://maps.eddyofarrel.com/. The other is the Chaser Zaks map at http://secondlife.softhyena.com/map/. The Chaser Zaks map is more versatile as one can zoom out for a "world map" view showing all of the continents. While it has a "find on map" listed on the right, it doesn't seem to do anything. The first map may change in the future as Eddy plans to update it, "I realise it's probably not that much use right now, particularly as there isn't (yet) any way to search for/load any particular region or area of the map, but I will add more functionality in the next few days if anyone thinks they would actually find it useful." 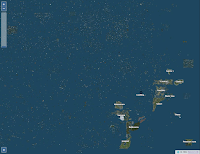 Neither map can see the new sims, which only show their names. On both maps, the land is still invisible.

Hopefully the Lindens and Moles will fix the Second Life map soon. Until then, hopefully these maps made by residents can help.