Yesterday on Tuesday March 30, 2021, Patch Linden announced on the official forums that the new Linden Homes, the Chalets, were now open for people to claim. "We are going to start our release of the Chalet Linden Homes today," he stated, "and we’re excited to be getting them out ahead of when we initially anticipated."

The homes come in eight styles, the first four shown at the Winter Expo called Reizend, Edelweiss, Matterhorn, and Alpenrose. The Lab also introduced four more with fewer walls, "so that you can add your own walls to create a customized floor plan. The open plan versions are named Ravensburg, Eikelen, Moritzburg, and Albus."

The terrain of the sims these houses are on varies from flat to hilly with numbers of trees around and larger rocky hills standing over surrounding areas. There are occasional windmills, which add to the atmosphere of the place. There's also a beer hall intended as a community center at Muehlenbach (160/119/37). Patch says once in a while, there will be a few changes in it's decor.

As before, some of the sims have amusing names such as Tea Party, Humble Pie, Geppeto, Wild Thing, and others. 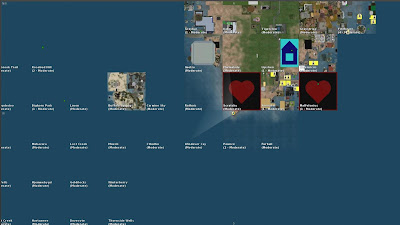 There is one big difference between the opening of these particular sims and other openings since the opening of Bellisseria.  These connect the Linden Home continent to the mainland sim to the east, Satori. This now means it's possible to fly or walk between most mainland sims without teleporting.

Unfortunately because of the map glitchs, we can't really show you the straits in which one can sail through the Chalet lands from Bellisseria to Satori. One will just have to go through to find out for oneself.

Patch Linden would post this video of Magellan sailing through the area, only to run into a pesky problem those living on the mainland are well familiar with. As for what the straits will be called, perhaps the Punky Straits.

It's an interesting development to close out the month of March.