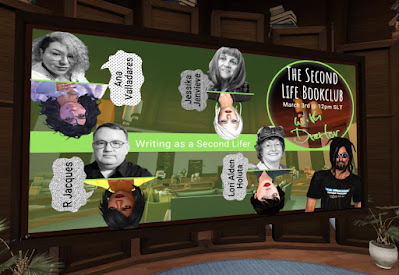 GoSpeed Racer, known as R. Jacques in real-life, in known inword for her DJing and running the KONA station. But lately she's also starting to be known for some novels she's written and published. She'll be among four writers in today's broadcast of The Second Life Book Club, hosted by Draxtor Despress.

Yours truly will be on Draxtor's SL Book Club show this Wednesday, March 3rd at 12 noon SLT. I will be part of a panel of four Second Life Authors/Writers being interviewed by the host, Draxtor Despres. We will also answer questions posed by the audience and Youtube watchers. In-world seating fills up fast, so plan to arrive at least an hour early. If you cannot get in then you can watch live on Youtube: