RFL Sunbeamers: "Bid Me Pink" And "Rita Gets POed"

Things have been eventful with the Relay's Sunbeamer team. Last Saturday, the first of the Bid Me events, Rita Mariner's "Bid Me Panda" concluded. A total of 3275 Linden dollars were raised by the fundraiser, and the team captain was obligated to spend a week in the "Po the Panda" avatar. The results were announced in the team group. 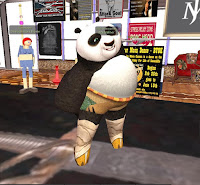 And here's the results of Rita's "Bid Me Panda"

Rita Mariner changes to "Po the Panda" for one week. Hope Cutlass has a good supply of ramen.

(just being funny, thanks again Rita)

But with one Bid Me ending, another soon started. Matt Carlton, also known as DJ Matt, volunteered for another: "Bid Me Pink"

Team Sunbeamers has a new "Bid Me" event: "Bid Me Pink." Our vic-, er, volunteer is the talented DJ Matt. She's put her nine tails on the line by offering to go pink for a time. For every 2500 donated (rounded down) donated in the right kiosk, she spends a week in pinkish fur. For those wanting to keep her coat orange, if the amount in the orange kiosk is higher at the end she stays normal. The fundraiser goes on to April 8.

As with other Bid Me events, there are two kiosks. The one of the left is the default which people can donate to if they want to keep Matt orange. As the announcement says, for every 2500 donated into the right one, she has to go pink for a week. The amounts are rounded down at the end, so 4999 would mean she spends one week in her new look, but 5001 would mean two weeks.

Matt herself has offered a little bonus. If a total of 10,000 Linden dollars or more, she'll spend half the time in Relay clothes. This can either be her Sunbeamer uniform, or other Relay gear such as t-shirts.

This Relay fundraiser is somewhat different from the others as it's at the Bouncing Bunny Beach Club in the SunWaterThree sim, where Matt DJs every Thursday. The event will conclude at the end of her set on Thursday April 8 at 6PM SL time, and the totals calculated.

On a final note, LiskaBystrouska's "Bid Me Purple" event is almost over. If you want to contribute to that one, head over to Club Cutlass in Sunweaver Bay (114/117/757) by 8PM tomorrow, Saturday March 20.