Relay BYOK Events: Moon Dance and Monday With The 'Roos

There's a lot going on this Relay season, and there are many events. Besides those at the Home and Garden Festival which will take place most of this month, there are the BYOK, or "Bring Your Own Kiosk" events. In these events, the hosting team invites others to take part, and will rezz a kiosk for other teams if people from them show up.

Thursday February 25 was the first of the weekly "Moon Dance" events. The first one last year was so popular, they soon held another.  The team decided to hold one every week, and it would be "Bring your own kiosk." 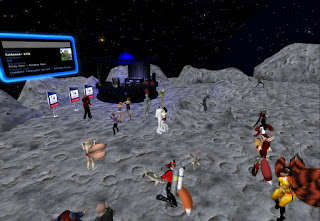 As before, it was held in the Sunlight Bay sim. People were invited to arrive at the Farshore Field Airport, and take the Moon Cannon up to the lunar surface where the party took place. Cynthia Farshield, the owner of the sim, played the tunes for the crowd. People were invited to click a lunar gravity bracelet giver, and they'd be light on their feet, "Sets your gravity to 1/6th normal when you wear it."  There were also a few aliens around the area, dancing in place, presumably to the music.

A few showed up in astronaut gear, or some kind of mask, as while there was enough air in the immediate vicinity for the time being, Rita saying, "Yes, we spared no expense, we had air shipped in," it didn't hurt to be prepared. One showed up in scuba gear, "Closest I had to a space suit." Among the tunes Cynthia played were some appropriate ones such as "Third Rock From The Sun, " "Children Of The Sun," "There's a Moon in the Sky," and others. And there was some joking around. "By the way uh sorry folks but the bar here has no beer." "The Aussies drunk it all, thats why it had no beer."

Besides the Sunbeamers, there were three other teams, Team ACTS, the new SHB Gems, and the popular Roos With a Dream. Team Sunbeamers would raise over 6000 Linden that night. SHB Gems raised over 2600, bringing their total to at least 4400 that night.

A few nights later on Monday March 1 was the "Monday with the Roos" event. 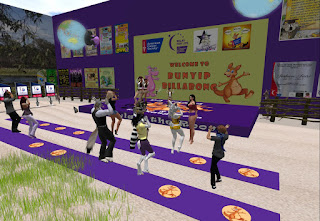 Start the week off right! Come spend Monday with the Roos, our weekly dance party at the Bunyip Billabong. Don't know what a bunyip is? Come find out! We'll have music by award winning DJ Kayla and dancing by the 'Roo with a thousand dances', dancemaster Ren. And don't forget to ask us to put out your team's RFL kiosk!

The event took place at the Red River Saloon in Lilith. Besides Roos With A Dream and the Sunbeamers, there were two other teams. SHB Gems was at this event as well, along with the Cure Chasers.

The Sunbeamers raised over 4000 Linden dollars at the event, as did the Roos and Cure Chasers. SHB Gems raised close to that amount, and would pass the 50,000 mark and make it into Bronze level.

Stay tuned for more stories on the Relay