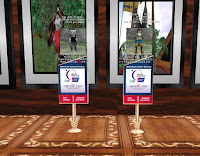 The Relay for Life's Team Sunbeamers has three new "Bid Me" fundraiser events. What's interesting is all three have the same theme, "Bid Me Foxy." Team Captain Rita Mariner, whom earlier did a "Bid Me Panda," would post about her event.

Yes, I have put myself up for another round of BID MEs. This time I will go FOX.. I have never had a straight FOX avatar, so this something new for me. Here is your chance to have me stuck in it for a couple weeks.  2500L/week.  Crack open those purses and wallets. 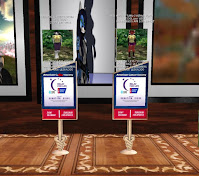 Two other team members were also putting their looks on the line. These were Cynthia Farshore and Shockwave Yareach. All three have the same conditions. For every 2500 Lindens donated into the kiosk on the right, rounded down, the person stays a week as an anthro fox. For instance, 4999 Lindens donated means one week while 5001 Lindens results in two weeks of chicken dinners. That is, unless the default kiosk on the left for those wishing to keep them their normal appearance ends up with a higher total at the end of the event.

All three of these "Bid Me" fundraisers have their kiosks in the back room of Club Cutlass at Sunweaver Bay (114/117/757), and all three end on Saturday April 10 at 8PM SL time, just as the party that night is finishing up. 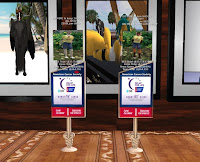 The Sunbeamer Date Auction ended on Saturday March 27 with Rita Mariner winning. Mieka May's own "Bid Me Foxy" event ends on April 3 at 8PM SL time. Two other fundraisers, Matt Carlton's "Bid Me Pink" and Nydia Tungsten's "Bid Me Mouse or Bunny" are at the BBB Club at SunWaterThree (75/56/25), and end on Thursday April 8 and Sunday April 11 respectively.