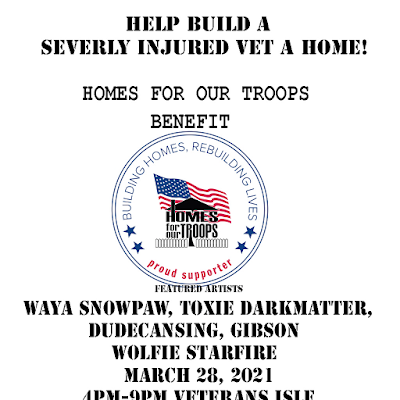 Frets Nirvana and US Military Veterans Group announce 2021’s March benefit for Homes For Our Troops in Second Life for March 28, 2021!

Frets Nirvana, longtime supporter and contact for Homes For Our Troops in Second Life in conjunction with the US Military Veterans Group, announces the 2021 February benefit for the Veterans Support Organization Home For Our Troops at Veteran’s Isle .

Frets Nirvana states:  “HFOT is a privately funded 501(c) (3) nonprofit organization building specially adapted, mortgage-free homes nationwide for the most severely injured Veterans from Iraq and Afghanistan. Most of these Veterans are multiple amputees, paraplegic, quadriplegic or suffered severe traumatic brain injury (TBI).  Since its inception in 2004, over 90 cents of every dollar spent by Homes for Our Troop has gone to directly support Veterans. DURING THAT TIME HFOT HAS BUILT 313 SPECIALLY ADAPTED HOMES NATIONWIDE FOR EXTREMELY INJURED VETERANS.”

In 2020 the community in Second Life sent  $15,750 to Homes For Our Troops, thanks to many kind hearts and great Second Life performers. THIS PUT SECOND LIFE’S DONATIONS EFFORTS IN THE TOP TEN OF HOME FOR OUR TROOPS DONORS IN 2020!

23 Veterans and their families received the keys to their forever homes in 2021 and the donations received in Second Life were part of that effort.  Currently HFOT has 62 projects underway for extremely wounded veterans.

Sponsored by Frets Nirvana and the U.S. Military Veteran’s Group of Second Life.  To learn more about Homes for Our Troops visit https://www.hfotusa.or

To learn more about Homes for Our Troops visit https://www.hfotusa.org

Sponsored by Frets Nirvana and the U.S. Military Veteran’s Group of Second Life.