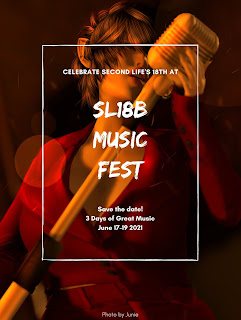 Part of the upcoming Second Life Birthday events is the Music Fest, a two day event organized by Linden Lab in which over three days a number of live musicians perform. On Friday March 5, the Lab announced they were accepting applications to take part in the auditions for the event.

Full details of this year’s SL18B event will be revealed soon...but to get things started we are opening up the sign-up process now for auditions for the annual Music Fest, to be held June 17-19. Music Fest will kick off the overall SL18B celebration with three days of live music performances featuring some of the most talented musicians in SL!

Are you a new or veteran Second Life musician that wants to participate? Over a dozen performers will be chosen to share their musical talents with the Second Life community in an event that has become an SLB tradition. We welcome performers to apply and join us in wishing Second Life "Happy Birthday!"

Musicians interested in trying out need to fill out a form (link here) and send it in by Sunday March 28. They are asked to show up an hour early, have one hour to play, and are allowed 350 prims for any props of theirs. As the event is G-rated, so must be the musicians' outfit and song lyrics. No date for the auditions has been give yet, though the Music Fest itself is scheduled for Thursday June 17 to Saturday June 19.

As of now, no theme for the SL18B has yet been announced, or applications for volunteers or exhibitors. But people interested were reminded to keep an eye on the blog.