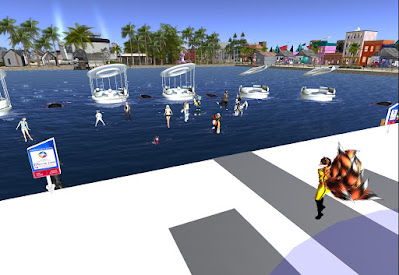 DJ Matt grew up in the Missouri Ozarks. Having lived near Branson and spending a a lot of time there seeing shows and also having some distant realatives that performed for Silver Dollar City, shi was raised on country music, blues, bluegrass and classic rock. Shi still has a great passion for these genres, country being her favorite. Music has always gotten hir though some of the worst times in hir life, and now she love to share some of these wonderful tunes with folks here on SL as a Tiger striped 9 tailed fox. Hope 3 (55,114,33)

Originally scheduled for one hour, Matt ended up playing music for two, all the while people donating Lindens to two RFL kiosks on either side of the stage. Although Matt is with Team Sunbeamers, the money didn't get credited to the team. Instead it went to general funds. Over time, there were various comments spoken about those lost to cancer and the effort to fund the fight against it. Matt stated that she had taken part in the Relay in real life before coming to the virtual world, and was thankful for her friends telling her about the Relay for Life in Second Life.

At the end of the two hour event, the two kiosks had an additional 21,493 Linden dollars.

DJ Matt currently plays every Thursday at the Bouncing Bunny Beach Club on Thursday afternoons. She just recently volunteered for a "Bid Me" event, the details which will be in the Newser soon.