Gacha Guild Back in Second Life 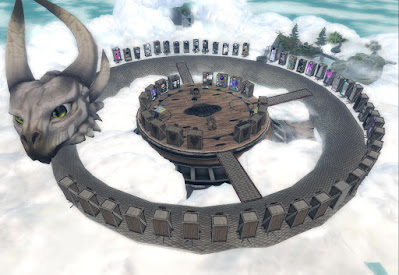 The Gacha Guild is once again taking place in Second Life. This twice a year event offers numerous gacha items for sale. This event's theme is "Sailpunk: Steampunk and Sky Pirates." The setting was on a sky platform with a huge steel dragon curled around it. There were also some islands in the sky one could explore by flying over or walking over via a gangplank.

To those not familiar with what a gacha is, several items are up for sale in a vendor. When someone makes a purchase, they get one of the items at random. Some of the items may be uncommon or rare. The items can be given to others, though some such as avatars can only be before they're unpacked, and there are groups in which people offer to trade the items, including the Gacha Guild's own.

The side area is fairly detailed, and offers some places to explore and see. One area is off-limits though, at least for now. Presumably it will open on Saturday March 13 when the Halftime Hunt begins.

The event takes place on an Adult-rated sim, so child avatars are asked not to come. Despite the sim rating, no frisky behavior is permitted.

To learn more, check out the Gacha Guild website at https://gachaguild.com/ .