The Relay's Team Sunbeamer has been steadily at work, as of the writing of this article having made almost 300,000 Linden dollars this season. Besides the weekly Moon Dances and two Bid Me events, they've just started two more fundraisers. There's a "Bid Me Foxy" and a date auction. Both are at Club Cutlass. 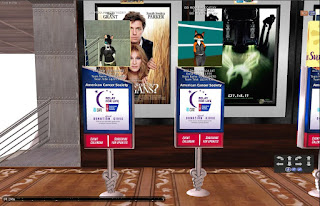 Mieka May is the lady volunteering for the third "Bid Me" event. Like the previous ones, there are two kiosks to donate to. There's a default kiosk on the left to let her stay her normal huskygirl self. And there's the one on the left people can donate to in order to get her to change to orange vixen for a while. For every 2000 Linden Dollars, rounded down, donated, she has to be a literal "foxy lady" (unless the default kiosk wins). For instance, if 3999 Linden dollars is the total donated, she only has to stay in the new look for a week. But 4001 Lindens mean she has to spend two weeks as a lady fox.

The kiosks for Mieka's "Bid Me" will stay up until Satuday April 3. At 8PM, the totals will be made final and the results announced. 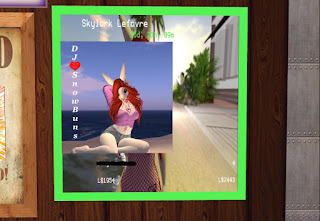 DJ Snowbuns (Skylark Lefavre) signed up not for a "Bid Me" for her first event, but a date auction. For this, there are no Relay kiosks, but instead people put their money in a picture of Snowy on the wall on the port doorway between the dance floor and back room. Two cash amounts are listed. The smaller is the current amount bid. The larger amount is what's needed to make a higher bid and take the lead.

As this is a Relay date auction, there's a number of limits to the date. Snowy says she can only go as far as skimpy clothes and maybe cuddling. She does love dancing, and a night at the movies or a day boating is nice, as would be some time at game tables or maybe some rides, "I can and will do a lot will just have to see what there is left remaining on SL to do. ... My days off are Monday, Tuesday, and Saturday. Sunday after my event am free sometimes."

People have until Saturday March 27 to bid on the Date Auction. At 8 PM, the results are made final.

Both of these fundraisers are at Club Cutlass in the Sunweaver Bay sim at (114/117/757). People in and out of the Relay are encouraged to hop over and make donations to these and other fundraisers.