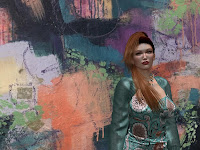 Newser reporter Kayly Iali recently met up with Second Life artist Sabine Mortenwold. Sabine describes herself as a mixed-media artist, one whom has been painting most of her life. She has had works on display in a few galleries, and has her own high above the Oxygen sim. Kayly interviewed her, and she would describe how she paints her works, what other artists she admires, and more.