Linden Lab at the VWBPE Conference

At the Virtual Worlds Best Practices for Education conference last week, there were three discussions in which there was at least one member of Linden Lab taking part, one per day of the three day event. At the first one on Thursday, Patch Linden was the sole person from the Lab. Of the three people leading the investment group that bought Linden Lab last year, Randy Waterfield, Brad Oberwager, and Raj Date, Patch stated he mostly worked with Oberwager and was optimistic about his intentions for the virtual world. "He has one mission: to be the best and biggest virtual world there can be. He wants to grow and invest in Second Life. He genuinely loves the product." All three were very interested in making Tilia, the virtual currency exchange service under Linden Lab, "grow and prosper," but as it had a "symbiotic relationship" with Second Life, the virtual world would grow as well. Patch stated Oberwager had the goal of increasing Second Life's userbase, "we want to double the resident population over the next 3-5 years." The team itself wanted to finish work on Amazon Web Services, and there were plans to work on the "onboarding experience for newcomers, "We've learned through the Pandemic. We've listened to users. It's given us stuff to latch on to, to make improvements that will help everyone."

At the Roundtable discussion on Friday, Patch, Brett (Marketing), Grumpity (VP of Product), Madori (Land Operations) were before an audience of residents. Grumpity expressed excitement about the Cloud Server project, "that will allow us to use cloud technology in ways to improve user experience." Brett talked about the Adult Swim event and the NFL Alumni Experience (that took place around the Superbowl). When asked about the possibility of the return of the Teen Grid, which was taken offline on Jan 01 2011, Grumpity stated they had "frequently talked about Teen Grid internally." When asked about the Zoom video communication service, Grumpity stated, "Being in Second Life creates a sense of presence that's not present on Zoom, and also they don't have to turn their camera on here, like in Zoom." When asked about the upcoming Android client, Grumpity answered, "We hear you, we're working on figuring out a solution to that. We're excited about possibilities that will allow us to bring SL to mobile devices." 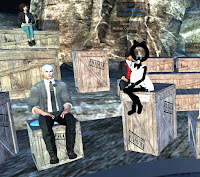 On Saturday, Grumpity and Brett Lindens were the ones appearing before the audience. Among the subjects discussed were trouble with griefers. They also discussed accessibility for residents whom English was a second language. They also talked about the Community Gateway Program, Grumpity commenting, "Nothing beats someone showing you the ropes." Grumpity stated there were new starter avatars in development by Linden Lab. Of when the Education discount was discontinued in 2010 and not brought back for three years, Grumpity would call it, "dark times ... I won't blame anyone, but it was wrong."

The Linden events and others can be seen in the VWBPE Youtube channel.