"Bid Me Purple" Results and "Bid Me Mouse or Bunny"

At over 337,000 Lindens at the time this article was written, the Relay's Team Sunbeamers is now eighth among the teams. Besides the weekly Moon Dance which it hosts and other "Bring Your Own Kiosk" events it attends, it's doing some "Bid Me" fundraisers. On Saturday March 20, LiskaBystrouska's "Bid Me Purple" concluded. The event brought in 12,050 Lindens, and she was committed to being a violet vixen for a month.

And the results are in for LiskaBystrouska's "Bid Me Purple" event.

Thanks again Lisk for your "grape" contribution for the team.

But in addition to the date auction, the "Bid Me Foxy," and "Bid Me Pink" events, club owner and estate manager Nydia Tungsten has stepped in to put her looks on the line as well. She has a "Bid Me" of her own, "Bid Me Mouse or Bunny" 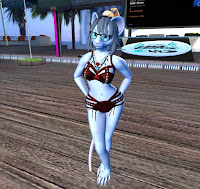 Team Sunbeamers has a new Bid Me event. The talented Nydia Tungsten is putting her looks on the line with "Bid Me Mouse or Bunny. This event has three kiosks. You can donate to make her a mouse, a bunny, or keep her as her normal foxy self. At the end of the event, the kiosk with the highest total wins out. If the mouse or bunny kiosk comes out ahead, she has to spend a week for each 2000 Lindens donated, rounded down. The event is at the BBBC and goes on until Sunday April 11.

Unlike the previous "Bid Me" events, this one has three kiosks. As usual, the one on the left is the default one where those wanting to keep Nydia as is can donate. But those desiring the white vixen have a new look for a while have a choice. For those with the intend of making her a mouse like her partner Brandi Streusel, there's a "Bid Me Mouse" kiosk in the center. For those wishing her appear in a bunny form, to the right is a "Bid Me Bunny" one. For each 2000 Linden dollars donated into the winning kiosk, rounded down, Nydia spends a week as the assigned look. That is, unless the default kiosk comes out ahead. 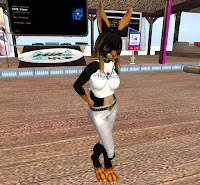 As with DJ Matt's "Bid Me Pink," the kiosks for this fundraiser are at the Bouncing Bunny Beach Club in SunwaterThree. The event goies on to Sunday April 11, and the totals will be made final at 9PM SL time with the results announced soon after.

So will Nydia end up squeaking on by, or will she be doing the bunny hop at the dance clubs? The donators will be the judge.

The date auction, featuring DJ Snowbuns, is almost over. Those wishing to make a bid to date the cute bunnygirl have until Saturday March 27, with the results made final just before 8PM SL time.

Among the Relay teams, Camping For a Cure is first, with over two million Lindens raised and the only Diamond level team. Second and third are the Cure Chasers and The River of Life teams, with over half a million raised each and are Ruby level. Eleven more teams, including the Sunbeamers, are Platinum ranked with over a quarter million raised.