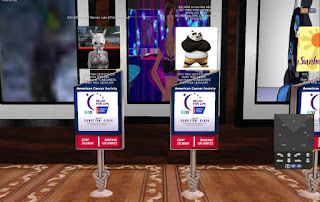 Relay team Sunbeamers is having it's first two "Bid Me" fundraisers. For those new to the Relay, they are based on the noted "Bid Me Bald" events that have been held almost since the start of the Relay for Life in Second Life. But for some avatars such as furs, losing their head hair isn't so drastic a change. So came events in which the volunteer puts their looks on the line in another way, such as wearing an avatar of a different fur color, or a different type of avatar altogether. Over time there's been a variety of possibilities done. 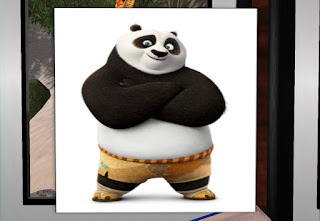 For the team's first "Bid Me," none other but it's captain Rita Mariner has put her looks on the line in it's "Bid Me Panda." As before, there is a pair of kiosks involved in the challenge. For those wanting to have Rita make the change to a "fat male soup-slurping panda," donate to the kiosk on the right. For every 3000L, rounded down, Rita has to spend a week in an avatar inspired by "Po" of "Kung Fu Panda." 5999 Lindens would count as one week while 6001 would count as two. For those whom want to keep Rita as-is, they donate to the kiosk on the left. If the amount in the left kiosk is greater, Rita doesn't have to change regardless how much is in the right. 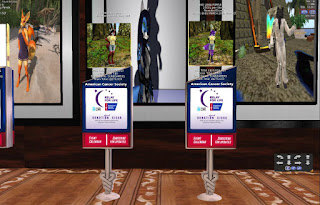 LiskaBystrouska is the volunteer for the second "Bid Me" event: "Bid Me Purple." The two kiosks for this one are next to Rita's. For every 2500 Linden dollars donated to the kiosk on the right, rounded down, Liska has to spend a week as a purple vixen. That is, unless more people donate to the left kiosk to keep Liska her normal Foxy self.

The "Bid Me Panda" event lasts until Saturday March 13 at 8PM SL time. The results will then be calculated and made final, and if successful Rita will change into her new look starting then. For Liska, her event goes on for another week, to March 20 at 8PM.

For those wishing to contribute to the events, the kiosks are in the back of Club Cutlass at Sunweaver Bay (114/117/757). The money goes to Team Sunbeamer's total for the Relay for Life, and the American Cancer Society.