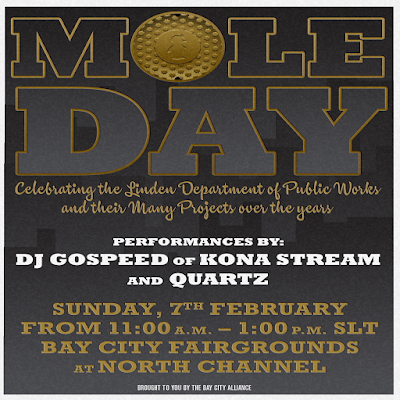 BAY CITY, SL (31st January, 2020 - Bay City will once again come together to salute the hardy Moles of the Linden Department of Public Works in with celebration held in the Bay City Fairgrounds.

Initially honored in 2010 by Residents of Bay City, Mole Day is set aside to show appreciation for The Moles and their many contributions to Bay City and the rest of the Second Life® Grid.

Normally held on the same day as Groundhog Day, this year’s annual Mole Day will take place a few days later, on the 7th of February, commencing at 11:00 a.m. SLT. The event will feature DJ GoSpeed Racer of KONA stream followed by Quartz performing live at 12:00 p.m. SLT.

The event will be held in the Bay City Fairgrounds in North Channel. As in past years, the invitation is open to all Second Life® members to join in the fun.

Moles essentially build all of the grid’s infrastructure: the public roads and railways, items in our coastal waterways and protected lands, and even larger scale projects like the Bellisseria regions, premium content and experiences, and much more. Bay City was their first such project.

For more information, or to participate in the event, please contact Marianne McCann.