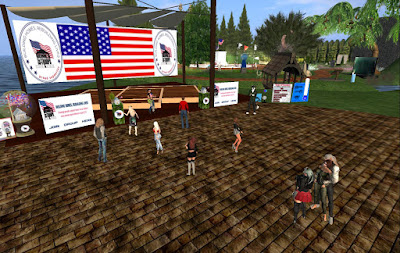 Sunday January 31 was when Veterans Isle held it's monthly benefit concert. From 5PM to 9PM SL time, four live perfromers played music for the crowd. The event, organized in part by guitarist Frets Nirvana, was to raise money for the Homes For Our Troops charity.

Zach Cale started things up at 5PM. At 6, Suzen Juel began performing for the audience. Rapid Randy quickly got onto stage at 7PM. Last but not least was Johnny Bellows. As the musicians sang away, people donated money to two house-shaped kiosks on either side of the stage. Occasionally, someone would challenge the audience to drop in a certain amount, promising to match it.

By the end of the event, a total of 115,202 Linden dollars had been raised for HFOT.

To learn more about Homes for Our Troops, chech out their website at https://www.hfotusa.org.