Watching the Mars Lander At The ISM 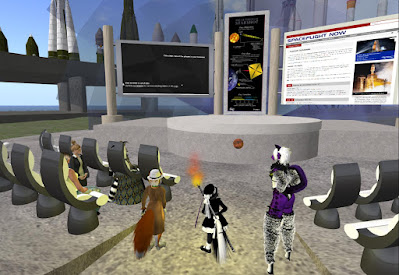 Yesterday, the Mars rover "Perseverance" touched down successfully. After a journey of half a year and 300 million miles, the craft entered the Martian atmosphere, deployed it's parachute, and landed without a problem in the Jezero Crater. The most advanced robot to date send to the red planet, it will look for evidence if there was ever life in the past on the world. Photos are already coming in, though it will take a little time for the car-sized robot to get moving.

In Second Life, me and several others were watching from the International Space Museum in the Spaceport Alpha sim. In the past, people went there for Space Shuttle launches and landings. But they would end in 2011. But whenever something like this happens, one's sure to find a few space fans heading over to watch (or in my case watch from the webbrowser as the screen inworld wasn't working). I talked a little with them, and besides a few moments of joking around, there was a general sense of optimism and hope. Despite the Pandemic, despite the deep freeze across much of the US, despite the political troubles, the march of science and progress continues.