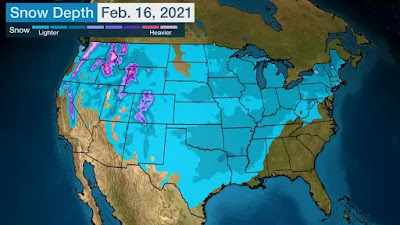 It's been a cold week across much of the US. A cold blast of air with temperatures most in the US would associate with Alaska and northern Canada has moved south not just into the northern states but also down south to the southwest and south-central states. Texas in particular has been hit hard as much of the state is without power. But the damage isn't just there and millions across the country have lost electricity, and of course Internet. The power outages aren't just from downed power lines, but blackouts being done to preserve power grids.

Over the news, there are stories of people in southern Texas burning furniture, children's wood blocks, and fenceposts to stay warm and cook.  More than thirty people across the country have died because of the cold, some from carbon monoxide poisoning when they kept the car running in the garage to stay warm. While "warming shelters" were an option in some cities, there was a risk from the Pandemic. In one town, people were advised to boil water before drinking it (which could be a problem without power).

In Second Life, a few residents I usually see haven't been on for a few days. Two from Texas messaged me, saying their power was out and wouldn't likely be getting back on soon, one saying she was told not to expect it to come back on for good until next week. Another ran out of firewood, until hearing where he could get some more and drove through icy roads for over an hour to get it. I've noticed some DJ events in clubs needing a substitute.

As bad as the situation is now, it won't last forever. Warmer weather should arrive next week, and for most of the affected areas so should the power. And of course their ability to get back online.