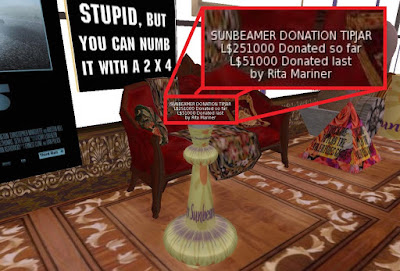 The Relay for Life in Second Life's official fundraising season doesn't officially start until Saturday February 20. But some of the Relayers have been getting ready ahead of time. This includes Team Sunbeamers, the Relay team of the Sunweaver community, whom last year made the top ten teams in terms of money raised. Not long after the last season concluded, team captain Rita Mariner set up an off-season tip jar for anyone to donate for the one this year. Over the months, thousands of Linden dollars were collected. And last weekend, Rita herself donated enough to bring the team just past 250,000 Lindens raised (or $1000 USD). Should fundraising levels be the same as last year, this means the "beamers" will begin past Bronze, Silver, and Gold, and right at Platinum level. 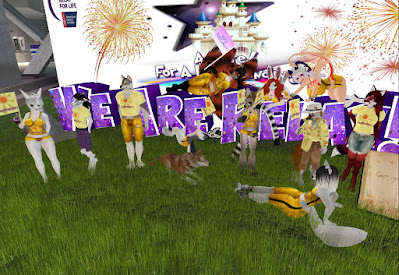 On Sunday Feb 14, those of the team who could gathered for a group picture at the America Cancer Society sim. This included the newest member, Andrew Foxian Arctic.

The Sunbeamers plan for an active season to get beyond Platinum level. This includes an Air Show, at least one Moon Dance, taking part in multiteam events, notably Relaystock, and of course some Bid Me Events. For one certain Sunbeamer though, that the team will start at Platinum means someone will have to own up to a promise. More details on that later.