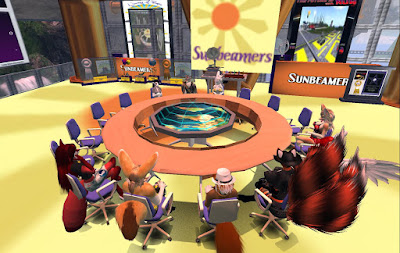 On Sunday January 31, the Relay for Life's Team Sunbeamers had their pre-season meeting in Sunweaver Bay to discuss strategy, led by team captain Rita Mariner. With "A Cure For A Happy Ending" being the theme, that gave builders Shockwave Yareach and Cynthia Farshore a good idea on what to have the Relay Weekend campsite. The team has also raised plenty of money in the past few months, well into what last year was Gold Level fundraising.

There were also plans for an air show, with the date expected to be sometime in May, though with a desire to avoid either conflicting with the Fantasy Fair or Relaystock. Besides having a camp at the Relaystock, there will likely be one of the team's DJs there. And of course there are the Bid Me events and the special Relay parties at the clubs. And for a certain Sunnie, "The Platinum Avatar Challenge."

It's going to be a fun and interesting season.