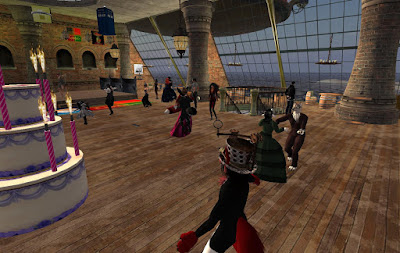 Tuesday January 26 was the real-life birthday party of Cynthia Farshore. For those not familiar with her, she's a prominent resident of both the Sunweaver and Caledon communities, running both Caledon Downs and Sunlight Bay. The event in her honor was held at Jones Estate in Caledon Oxbridge Village. Mimi Carpenter and then Sasha Prismara Featherlight (SashaVeiloftears Resident) were the DJ for the event. There was a large birthday cake and a few refreshments to the side.

The party was attended by people of both Caledon and the Sunweaver communities. There was much joking around and comments about how things have changed over time. "It's January, so no Death March!" "Here in Caledon, we party like it's 1899." "This is Caledon; after all. Mad Science is our everyday!" "I have time travelling Pun Police in my novel." "Good thing we don't have Pun Police, Bixyl would be writing the SL Newser from solitary confinement."