For those whom have been waiting for the Lab to come up with some new last names, good news. Yesterday on Wednesday February 10, Linden Lab announced a list of newly available last names. 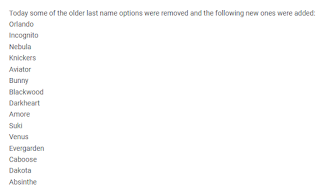 We have been very pleased to see the response to the return of last names back in April of 2020. Much as we did with the original legacy surnames, we plan to continually update and change the last names that are available for selection. Now that Uplift is complete, we anticipate that the rotation of available options will happen more often.

So of the original list of last names, about half remain as options.

As a reminder, new residents do not get these names as an option when creating their accounts. Instead the ability to change one's account is a perk for Premium accounts, and in addition there's a fee. So someone with a basic account will need to pay a total of $51.98 USD to get a last name other than "Resident."

Since the return of last names in April 2020,  there has only been one previous change in the list of surname options, in June 2020. With the move to The Cloud complete, the Lab states there will be changes more often. So far in the forums, there hasn't been much reaction on the two threads created (here) and (here). What reaction there is so far seems to be reactions of amusement.

Will we soon see names like Going Incognito, Honey Bunny, Marsand Venus, Thats Amore and others? Time will tell.

What do you think of the new names. Please leave comments below.