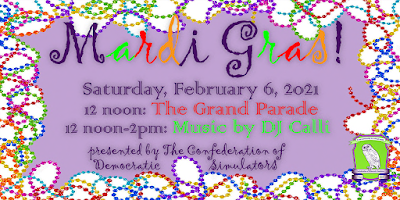 Mardi Gras isn't until Tuesday February 16. But the residents of the Confederation of Democratic Simulators, or CDS, they're going to celebrate a little early. On Saturday February 6, they'll be having a Mardi Gras parade. The floats will start in Colonia Nova at the column, at Colonia Nova (56/203/43). The parade starts at Noon SL time, and the event is scheduled to go on until 2PM.

For information on how to get a float in the parade, and any other questions, contact Kyoko Furse-Barzane (Samara Barzane).