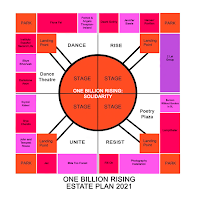 Friday I was lucky enough to visit the One Billion Rising regions since I was there to train as a greeter for the event. I have been doing this since 2013 on Valentine Day. It is a one day event so very  busy . The builds there are in recognition of the reason for this day all over the world.

"ONE BILLION RISING began as a call to action based on the staggering statistic that 1 in 3 women on the planet will be beaten or raped during her lifetime. With the world population at 7 billion, this adds up to more than ONE BILLION WOMEN AND GIRLS.

Every February, we rise – in hundreds of countries across the world – to show our local communities and the world what one billion looks like and shine a light on the rampant impunity and injustice that survivors most often face.  We rise through dance to express joy and community and and celebrate the fact that we have not been defeated by this violence. We rise to show we are determined to create a new kind of consciousness – one where violence will be resisted until it is unthinkable. And we here in Second Life can be part of this global movement." 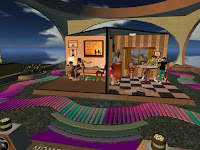 Builders were working furiously to get their installations in place. I stopped at one that was nearly finished to talk to one of the builders , my friend , Mrs. Mia Wallace (Mia Quinote). She and Herbie Haven were representing the " Burners Without Borders Second Life (BWBSL) a grassroots, volunteer-driven, virtual community group. We participate with non-profit initiatives in the virtual world to help make a difference! eg: RelayForLife, and OBR." with a thoughtful installation of a family in crisis  called Moments in Time. The other side of the installation though, show the possible future. after Covid.  She gave me permission to use the photos to show an example of the theme of the day.

There will be parties on the main stage and poetry readings and live performers and four beautiful regions to explore so don' t miss it. There are four  entries where all Kiosks will give you so much more information . It begins at Midnight Sunday and closes at midnight that day. Builds will remain in case you run out of time.

Here are two entry points in case one region is filled .