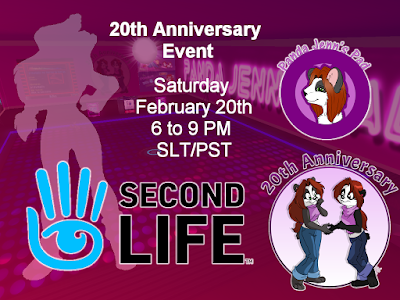 Remember Panda Jenn's Pad, which was written about last year? Sadly, it was taken down after the owner of the land left Second Life. But Panda Jenn (PandaJenn0 Resident) recently told me the venue is back. This time, it's high over the Zeta Valley sim.

Like before, it's meant to be a comfortable hangout. As when it was first around, one can listen to the music, as well as dance away to it with a friend, or with one or two bot dancers who are sometimes there. But there have been some video games added. One can also order a drink from Deadpool at the bar. And there's the artwork of Jenn's. She's added many more of her pictures.

Jenn also told me a special party is being planned for the 20th anniversary of the character Panda Jenn. It's scheduled for Saturday February 20 between 6 and 9PM.

Jenn, Jennifer Carnivele in real life, is known for her online comic "Simply Panda Jenn," and for her artwork, which one can find on her Fur Affinity and Deviant Art pages.